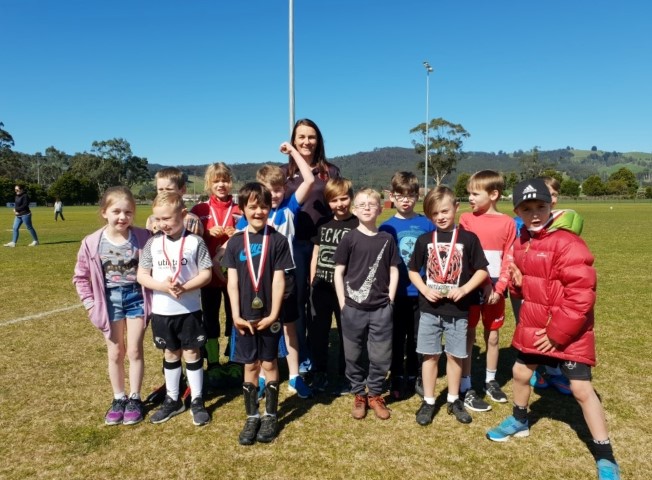 Trafalgar Victory FC held its 2019 Junior Presentation on Saturday the 31st of August at the Trafalgar Recreation Precinct.  Under beautiful blue skies the youngest Trafalgar Victory players and their family members filled the TVFC club rooms to celebrate what was an excellent season.  Each team was presented to those in attendance and there were many proud coaches, players and parents present to enjoy the formal part of the gathering. The entire cohort of kids and parents then enjoyed a shared meal and took to the soccer pitch for the annual “Parents V Players” match.

The MiniRoos numbers were really pleasing this season and TVFC have been extremely fortunate to have some amazing coaches to help foster a love of the game in our youngest club members. Each MiniRoos player was presented with a medallion featuring a lovely Trafalgar red and white ribbon.  Coaches of each team were also recognised and presented with a gift for their team and the TVFC committee.

TVFC wishes to thank the following MiniRoos volunteers for their dedication and willingness to provide the best possible football experience to our youngest members:

There were of course many other parents and TVFC volunteers who offered assistance on games days and TVFC located gala day.  The club wishes to thank all who assisted in the delivery of the MiniRoos program.  Thank you also to the parents who got their children to and from training and game days.  Your efforts throughout the season has not been forgotten.  Thank you for choosing soccer and Trafalgar Victory for your son(s) and/or daughter(s).

A huge “thank you” must also be given to Tanya Makins who has overseen the TVFC MiniRoos for the past 2 seasons.  The role of MiniRoos Coordinator has expanded greatly across recent seasons and it involves the management of the season commencement, allocation of coaches, scheduling of training, overseeing of the program delivery, team management & communication, activities, fundraising, transport coordination and end of season presentation. On top of these responsibilities Tanya coaches the Under 8s, plays for the senior women’s team and is a very active committee member. It is therefore with sadness that TVFC has acknowledges notification from Tanya that she will not be coaching or coordinating the 2020 TVFC MiniRoos program. All at the club would like to thank Tanya sincerely for her contribution towards the MiniRoos program and to the  club in general. We sincerely hope she has some connection with the club in 2020 and beyond.

The Junior Presentation also acknowledged the great season and achievements of the TVFC Under 12 junior team.  This group of players have shown great development throughout the season and have proven to be an “extremely coachable and very likable group of kids” according to their Coach, Shirley Guthrie.   The team is so very important to the club who wish to grow its junior numbers in season 2020 and beyond.  The following awards were presented to the Under 12 team: 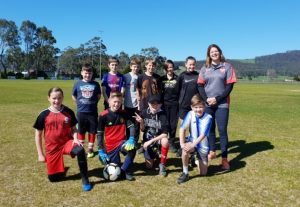 Team Manager of the Under 12s, Andre Van De Beek, was also acknowledged by Coach Shirley Guthrie for his significant contribution towards the smooth running and management of the team. Andre organised cleaning and canteen rosters, linemarking, goal setup and packup and was a great support to the team coach throughout the entire season.

A huge thank you to Shirley Guthrie for taking on the role of Under 12 Coach for the season.  She is a great manager and instructor of junior aged teams and the players under her tuition always develop, both in terms of skill and in terms of the love of the game. Players in the Under 12s know they have a coach who cares greatly about them, as do the parents who are very appreciative and supportive of Shirley.  Parents and players presented their Coach with a gift of thanks,as did the TVFC committee. It was very thoughtful of Shirley to thank and acknowledge the entire TVFC committee individually.

Once again the TVFC committee thank the players and families who selected Trafalgar Victory FC as their club of choice for season 2019.  We trust you have had an enjoyable experience and association with the club. We also hope you would consider TVFC for your son(s) and daughter(s) for season 2020 and beyond. Thank you for being part of our community, enjoy the off season and we look forward to seeing you once again in the red & white in 2020, as TVFC celebrates its 25th anniversary.