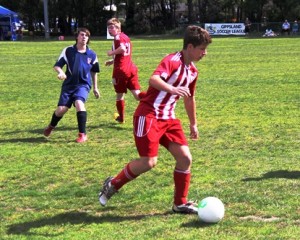 Rudy, who plays as a striker in both the Under 16s and Youth teams, made selection for the first time.  Whilst Tim, a seasoned campaigner and experienced defender, gained selection for the fifth consecutive tournament.  Under 16 squad coach Jason Reddiex would have been impressed by Rudy’s strength on the ball and his “never say die attitude”.  Whilst Tim’s experience and all round class would make him a must for any GSL representative squad.