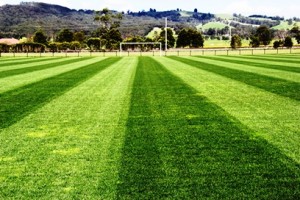 BBSC advised TVFC that the TFNC needed to rest their oval so that they could potentially host a Mid Gippsland Football League finals match.  The irony of the situation is that TVFC themselves have applied to host this seasons Gippsland Soccer Leagues South Division grand final.

TVFC have in the past week alone rejected applications from two other GSL clubs, two Gippsland representative teams and Football Federation Victoria Zone Coordinator to use the grounds.  The club also resisted temptations to train over the recent school holidays.  All such measures have been made in an attempt to maintain the excellent playing surface, both short and long term.

Despite investing in excess of $90,000.00 of its own funds towards the development of the BBSC facility, and paying a tenancy fee for the soccer season, the club was not even consulted by the council or by The Trafalgar Football and Netball Club regarding the training arrangement.  Neither did the club receive any notification from the Trafalgar Recreation Precinct Committee of Management, upon which TVFC has representation.

To make matters worse the TFNC were granted training access on the same night and time as known TVFC scheduled training.  In effect the TVFC Women’s   team were forced from their training pitch to accommodate the Trafalgar senior football squad.  The additional 60 players on the grounds would most certainly have impacted upon the playing surface according to the shire’s very own Parks and Gardens team who maintain the grounds.  Accordingly, TVFC cancelled all training in an attempt to minimise the damage caused by the additional stress upon the grounds.

One only has to look at the state of several Gippsland sports fields to appreciate that Trafalgar has an exceptional playing surface.  It is extremely frustrating that the lack of management from Baw Baw Shire Council and the arrogance of the Trafalgar Football & Netball Club has seriously jeopardised both the future of this facility as well as trust within the ranks of TVFC.  Trafalgar Victory believes this is an asset worth fighting for.

Trafalgar Victory FC would like to thank the massive amount of support received from members of the local soccer clubs and the wider Gippsland community.